While navigating the streets we find ourselves surrounded by people we do not know. The only thing we know about each other is that we accept to move through urban space together. Because we live in a society built on trust, we attempt to predict the stranger’s present and future conduct. We are expected our behaviour to have a ‘promissory character’. For security reasons we are searching evidence that justifies the trust in the other.

Because we cannot cope with the large amount of people we face on the streets everyday, we unconsciously fear the stranger. The vertiginous variety of people with different life-styles we encounter in such close proximity can be overwhelmingly frightening and stressful. Therefore we prefer to remain anonymous in the crowds. To understand this fear I like to unpack the concept of public ‘togetherness’ that Richard Sennett describes as a contradiction: we dwell with the desire to belong to the group but we seem avoid contact with that group. Engagement with strangers rarely happen because of the challenges and insecurities that come with it; we could get hurt or disappointed, or we might get involved in a long conversation that we do not have time for. Therefore, often the stranger remains unknown.

Based on the dramaturgical approach of Ervin Goffman, I consider the street, a stage where we, the actors, are performing with the city as decor. In daily life we are performing social roles and we wear the appropriate mask for that. While commuting the city we drop this mask and replace it for another one, the mask of ‘self-protection’. I’m interested in this mask, because I believe it gives us a lot of information of ‘the self’ and the construction of identity.It is a mask of ‘non-engagement’ as well: modern city life gets us over-stimulated, and we detach from space and reality.

The anonymity of the man in 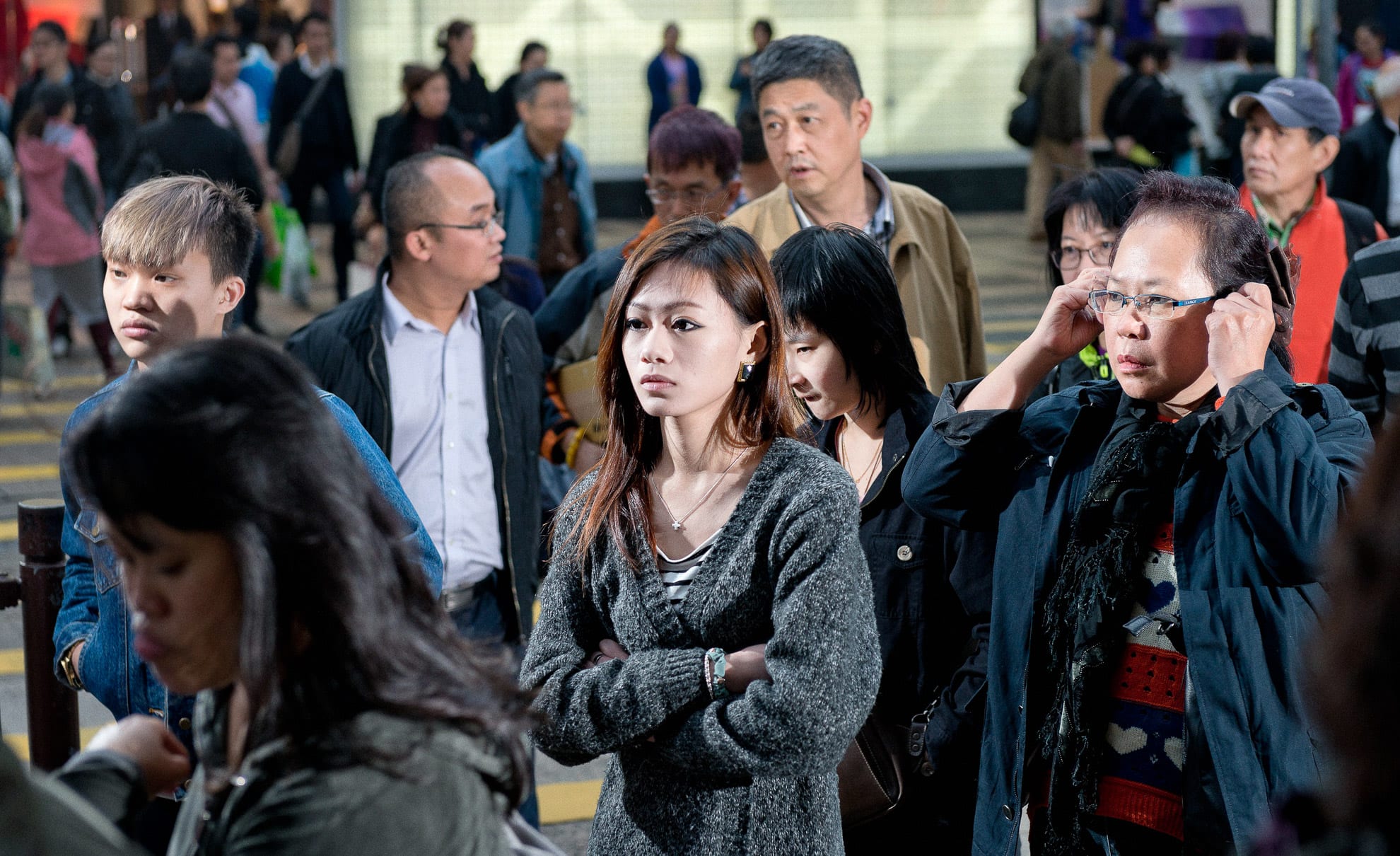 the crowd is an important part of the metropolitan experience. To quote George Simmel “One nowhere feels as lonely and lost as in the metropolitan crowd”. The feeling of isolation can be more intense when a stranger without relations is in close proximity to others, like at a party or in traffic in a large city, than being physically alone in an empty place. There are unwritten social rules which provide each individual with a certain space and freedom, as long as we leave the others alone. Within certain boundaries, it is allowed to watch and observe, to look at something in public that is actually private. We observe the stranger in public areas of the city, where we are alone in the crowd and, in company of strangers.

Since the beginning of the Urban Millennium, we are facing the biggest wave of urbanisation in human history. Just over a century ago, only 13% of the world was urban, whereas the United Nations now predicts that 75% of the global population, close to 6 billion people, is expected to be living in cities by 2050. Most urban migrants move to cities in search for jobs and opportunities, they abandon rural areas in favour for the promise of the city. To me the densely populated streets of modern megacities are perfect stages for small everyday human dramas.

In 2011 I started a monumental visual exploration on the effects of the growing population density in the most crowded cities. I selected 8 fast growing megacities around the world that hold 20 million inhabitants, or will reach this number in the next couple of years. These cities grow with 50 new inhabitants an hour. What does this excessive growth do with our sense of personal space in the public domain? Next to the concentration of people, the cities are depicted on their level of mobilities and especially the movement of pedestrians. I am fascinated by the distances between people and the human scale in relation to the built environment. I perceive the daily movement of commuters as ballet choreography. I like to photograph in the most crowded centres of cities, where there is very little personal space and people brush-passing each other. Often I end up in places where people work, shop and travel, which is around offices, shopping areas and public transport stations. I focus on private lives in public places, for example these awkward moments that appear in places where there is little personal space, comparable with the situations in elevators, where we are expected to maintain ‘civil inattention’.

The cities I photograph are ‘on the move’ and its inhabitants are in transit. I try to capture offbeat moments that remain unseen at the everyday speed of life. The images suggest off-screen events since they are more about what is outside than inside the frame. They make you wander what just happened or is going to happen next. They appear as film stills out of a non-linear urban continuum. I am drawn to the working of the arresting shutter: the unique quality of photography to arrest movement. Due to the cinematic apparatus, these frozen scenes become hyper-real. I intend to slow people down and make them dwell on the meaning of inhabiting the new reality of these fast growing cities. 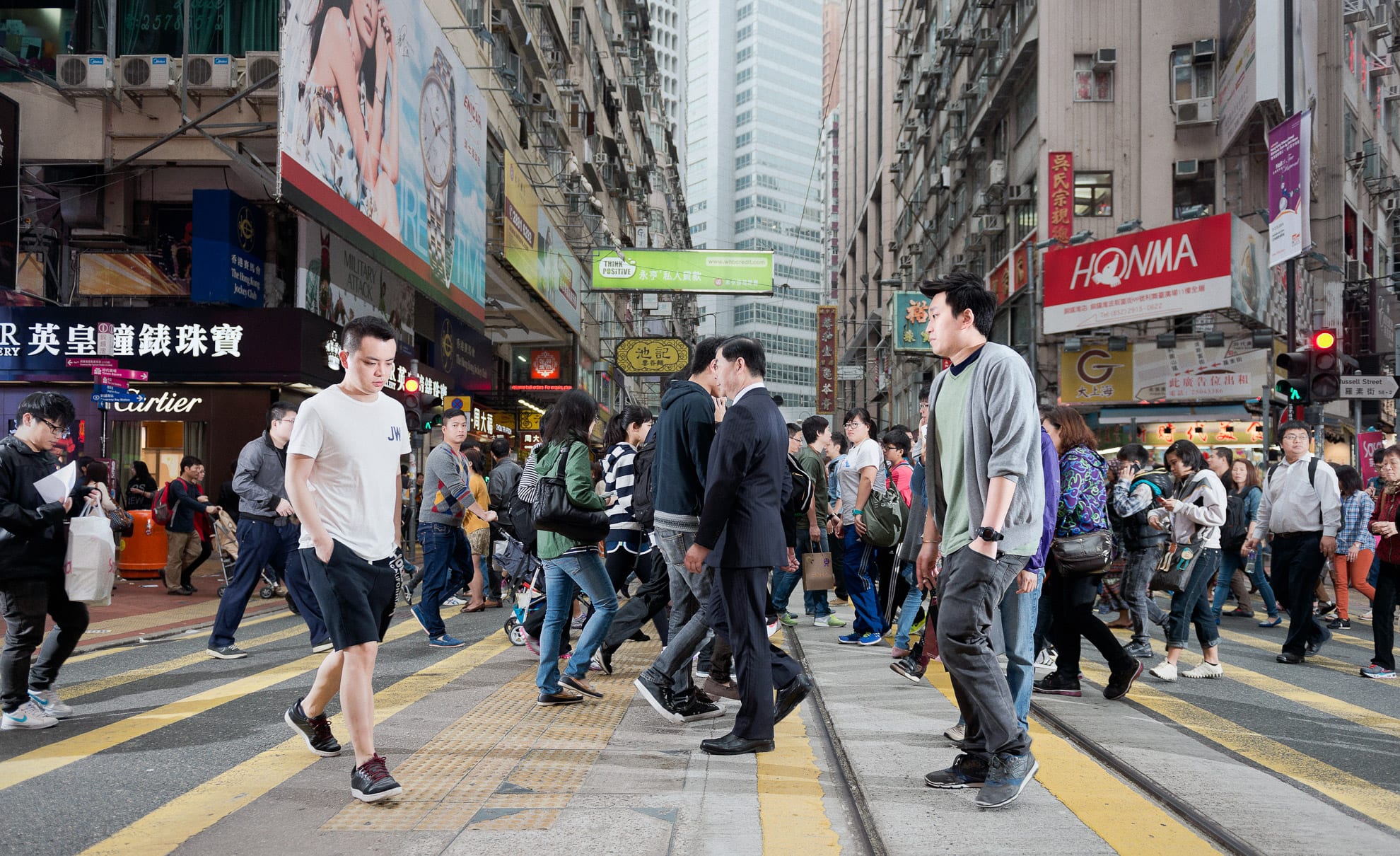 Looking at photographs is like stepping into the presence of others. We do not know anything about the people we see; they come from nowhere and on go to somewhere. Almost everybody is showing the ‘45 degrees looking downward head position’ whether they are using their telephone or not. We are seeking information about the person captured in the frame. We might be interested in his socio-economic status, his conception of self, his attitude towards others etc. My photographs are an invitation to get intimate with the stranger.

I am convinced the street is a place to learn from; it can hold up a mirror to society. It is a pressure cooker for human expression and development. I always considered the differences between people to be part of the spectacle of the street. This is the theatre of the real life, a place of extraordinary dynamics, where the most disparate elements are consistently thrown together in a fascinating mise en scène. To me the high concentration and diversity of strangers represent the fun and excitement of exploring the unknown.

The history of the city animal is one that moves between harmony and chaos, between fear for the unfamiliar and freedom of anonymity. It is a love-hate affair with the city. In the street we cannot really escape from the imposed closeness of the stranger. Our relationship with the unknown is ambiguous as well, both repulsive and attractive. The stranger might be a threat or a promise. Which one it is going to be gets determined when our eyes cross the ones of the stranger. The urban encounter might be an interesting opportunity or exciting friendship, whether he or she is your neighbour, a tourist or a refugee. It is in these subliminal moments, these inspiring microsecond meetings, where we overcome fear and get driven by curiosity.